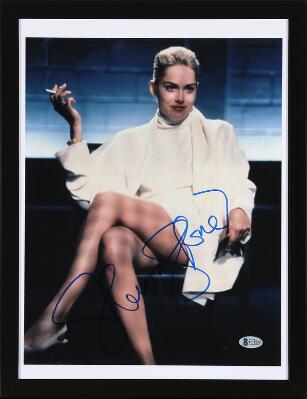 “Basic Instinct” caused - due to its portayal of the lead character, the lesbian author Catherine Tramell - certain protests when it was released in 1992. This, however, did not keep the global, mainly western, audience away from the movie theatres. “Basic Instinct” reached a total turnover of 470 million dollars, a fact making it the fourth biggest blockbuster in history.

The scene, in which Sharon Stone during an interrogation crosses her legs, is today iconic.

No remarks. This is an original colour photograph with the authentic signature of the American actress Sharon Stone. Certificate of authenticity from BAS included. BAS is one of the most reputable authorities in the world in regards to valuation and authentication of signatures.