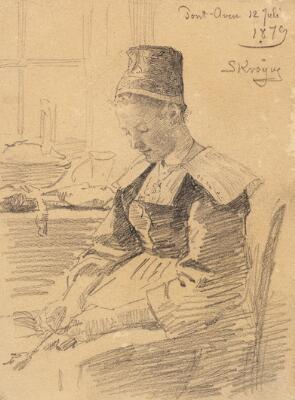 Interior from Brittany with a young woman sitting by a window. Signed and dated S. Krøyer Pont-Aven 12. Juli 1879 and inscribed with dedication on underlying paper (in Danish): “To my old teacher, professor Vermehren, from his devoted pupil. P. S. Krøyer”. Pencil on paper laid on paper. Sheet size 15×11 cm.

In the beginning of July 1879, Krøyer embarked on a walking journey through Brittany in the company of Christian Zacho and an unnamed French painter. They arrived in Pont-Aven on 11 July, where they stayed for around seven days. During his stay in Brittany, including Pont-Aven, Krøyer sketched and painted several of the locals in their characteristic Breton dress. The young girl in the present drawing, is repeated in an oil painting from 14 July 1879 and in a drawing from the same period. Hirschsprung notes of the three works (in Danish): “Three days after his arrival, he painted this small, delicate, and light-filled painting of the girl, shelling peas by the window. The girl had already modelled for Krøyer on 12 July, and another drawing depicts her in the middle of sewing […]”. (Marianne Saabye in “Krøyer i Internationalt Lys”, 2012, p. 187. The two other works referred to here are reproduced on p. 186 in the catalogue.) Presumably, the drawing mentioned here as dated on 12 July, is the present drawing.