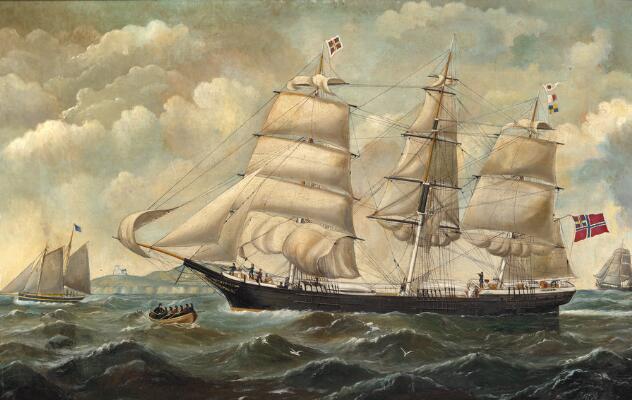 The Norwegian tall ship Activ, which is heaving to on starboard tack, with the sails of the mainmast braced aback awaiting a pilot. The ship carries the Norwegian flag, including the union mark of Norway and Sweden, which was in use 1844–1899. On the foremast, the pilot flag “In Need of Pilot” is carried, which is the union mark with a white border around it. A navigator stands with his long binoculars on the aft half-deck and watches for the pilot who is on his way in a dinghy from the pilot schooner, observed across the starboard side of the Norwegian ship. Signed Wm. Yorke. Oil on canvas laid on board. 61×92 cm.

We are grateful to Erik Kromann, director at Marstal Maritime Museum for his help in cataloguing this lot.