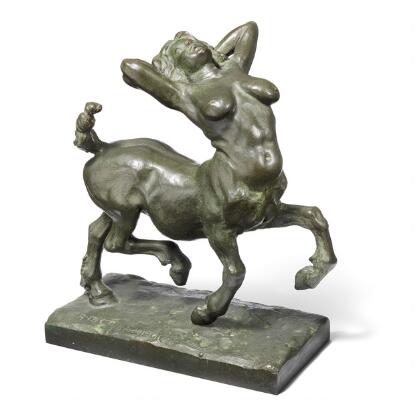 Purchased by Fuglsang Kunstmuseum in December 2021.

“The Centaur girl”, which is up for auction and can be found in another version at Odense City Museums, is modelled on the couple's maid – with whom Carl Nielsen had a long-term affair. The story only came to the sculptor's attention after the model was made, but with this new knowledge, she decided never to exhibit the figure before after the passing of Carl Nielsen. It exudes vitality and a sensual drive for life. The young girl leans back alluringly and stretches her back in an arc, which reveals her heavy bosom – while the lower body with four stretched horse legs and a knot on the tail is moving forward at a brisk pace.