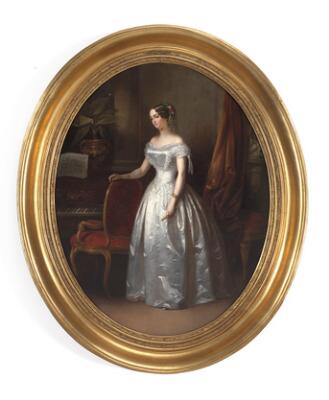 Morten Thrane Brünnich was a Danish-born Russian artist, educated from the Danish Academy of Arts in Copenhagen, where he became a portrait painter. In the early 1840s he emigrated to Russia, where he achieved even greater succes. Here, he painted for the higher Russian bourgeoisie and the Russian nobility. He even painted for the Imperial Russian family, e.g. a portrait of Grand Duke Mikhail Pavlovich of Russia's three children (1843). More Russian portraits by Morten Thrane Brünnich are owned by the State Hermitage Museum in St. Petersburg.

Relined with retouches, some crackles and a few minimal peelings.