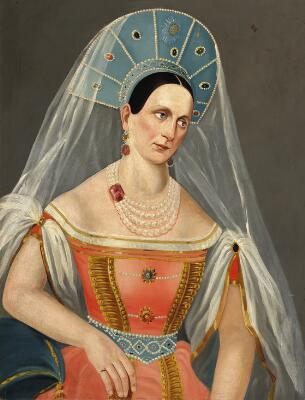 A. Maliukov, after, 19th century

Portrait of Tsaritsa Alexandra Feodorovna of Russia (1798–1860) in Russian Court dress with kokoshnik and veil. Unsigned. Oil on canvas. 89×69 cm.

Tsaritsa Alexandra Feodorovna, née Princess of Prussia, was married in 1817 with Grand Duke Nicholas Pavlovich of Russia, the future Tsar Nicholas I of Russia (1796–1855).

The original portrait by the Russian painter A. Maliukov is dated 1836 and owned by the State Hermitage Museum in St. Petersburg.

Minimal peelings, a few scratches, crackles and marks in the canvas from the stretcher. Also a patch on the reverse/retouch on the front. In need of a surface cleaning and tightening.