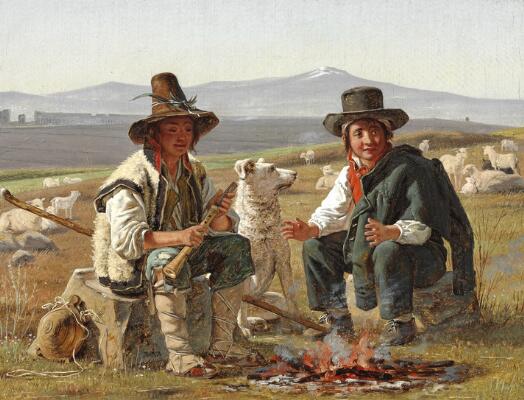 Thorvaldsen's Museum, A Catalogue Raisonné of the Works of Martinus Rørbye, 1981 no. M. 97. Here it is mentioned that Rørbye did not finish the boys' faces, these were later finished by Wilhelm Marstrand.

Rørbye began working on the larger painting on 18 December 1834, and finished it on 26 January 1835. In his diary on 28 March 1835, he mentions the present painting (in Danish): “Worked on a small copy of my painting of the shepherd boys”.

Provenance: The estate of the late Martinus Rørbye, auction 1849 no. 41. Here is mentioned (in Danish): “Drengenes Ansigter dog ikke udførte” (The boys' faces are not finished).

Please note: The item is subject to the Anti-Money Laundering Act. In the event of a hammer price of DKK 50,000 or more, including buyer’s premium, the buyer must submit a copy of a valid photo ID and proof of address in order to collect the item.