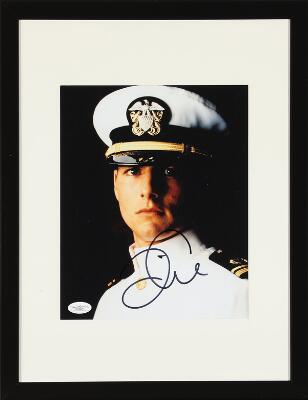 “Top Gun” was released on 16 May 1986 and received positive reviews from the beginning, especially in regards to the flying scenes, which later turned out go have great value for the educational institution US Navy Fighter Pilots (the number of applicants went up with 500 %). The film had a global turnover of 350 million dollars and won an Oscar for its title song, “Take My Breath Away”, delivered by “Berlin” and written by Giorgio Moroder and Tom Whitlock.

The aircraft carrier scenes were all made unboard the USS Enterprise, which from time to time changed its course due to the Sun's angle, an important factor in outdoor film making. Each time the course was changed the production company behind the movie paid 25,000 dollars to the US Navy.

No remarks. This is an original colour photograph with the authentic signature of the American actor Tom Cruise. Certificate of authenticity from JSA included. JSA is one of the most reputable authorities in the world in regards to valuation and authentication of signatures.