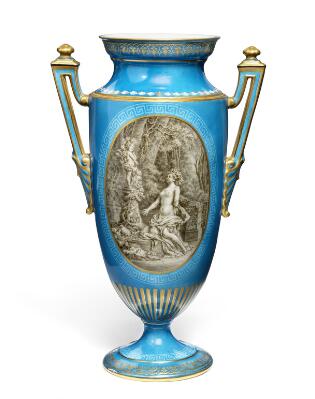 A Russian Empire style porcelain vase, of amphora-shaped form, adorned with stylized foliage and meander border in white and gold on turquoise ground, front with oval grisaille cartouche depicting Pan and Afrodite in a classic landscape, signed I. Kh. (in Cyrillic). Stamp mark A III in a wreath for Tsar Alexander III of Russia (1881–1894). The Imperial Porcelain Factory. H. 31.5 cm.

Provenance: Acquired by civil engineer Karl Mathias Hassenkamm (b. Vejle 1889, d. Gentofte 1972) presumably at the estate auction of Prince Valdemar of Denmark, Sagførernes Auction House 15 May 1939, where he bought several items. This present vase is presumably one of the pair, mentioned as catalogue no. 534: “Two vases, light blue and gilded, decorated with cupids in medaillons”. Prince Valdemar of Denmark was a younger brother of Tsaritsa Maria Feodorovna of Denmark. Thence by descent to K. M. Hassenkamm's grandson with residence in Denmark until today.