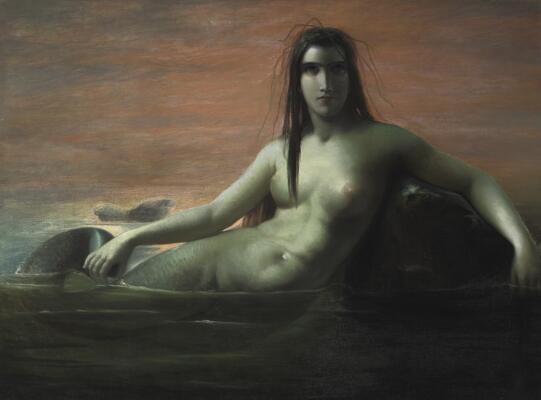 Today, it is still unknown how many mermaids Jerichau Baumann painted, as she exhibited several works abroad, including at the World Fair in London in 1862 and in Vienna in 1873. Two different types can be found in Danish museums, namely a version from 1863 at Brandts in Odense and a version from 1873 in New Carlsberg Glyptotek in Copenhagen (inv. no. MIN 0894).

The mermaid motif was popular in the 19th century. Both Elisabeth Jerichau Baumann's husband, the sculptor Jens Adolf Jerichau (1816–1883), and a long-time friend of the family, the fairytale writer Hans Christian Andersen (1805–1874), worked with the mermaid theme. The latter even made a short poem to Jerichau Baumann about the mermaid, after she had donated him one of her mermaid paintings as a birthday present.

“You master the splendour of colours” A soul you have placed in the mermaid's eyes: A wink from you, from the spirit's power! My gratitude here expressed in mere words"