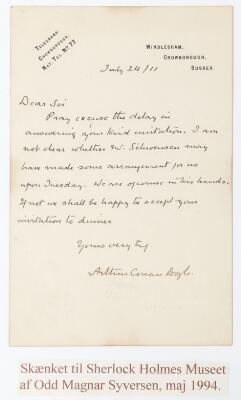 The occasion is Doyle's attendance at his brother's wedding on 2 August 1911. His brother, Major John Innes Doyle (1873–1919), was actually married in the Church of Holmen in Copenhagen with the Danish concert singer, Miss Clara Schwensen (1881–1930), daughter of Landowner Reinholdt Schwensen (1829–1917) from Lolland, who is described in the letter as “Mr Schwensen”.

The recipient of the letter is anonymous, but it is most likely the English emissary, Sir William Conyngham Greene (1854–1934), with whom Doyle had dinner with in Copenhagen the day before the wedding. In this way the letter is not only related to the world of Sherlock Holmes in general, but also has a fun historical relevance for especially Danish Sherlockians.