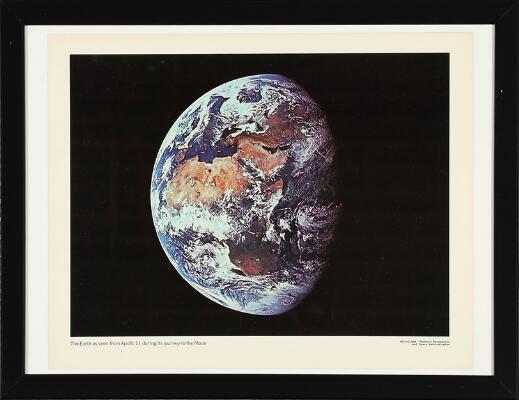 The very first image of the Earth seen from space was taken on October 24, 1946. That day a group of American scientists succeeded in launching a rocket with a built-in camera. It went 105 kilometres up in the sky. The launching took place at White Sands Missile Range in New Mexico.

The photographs by Neil Armstrong (1930–2012) and Edwin “Buzz” Aldrin (b. 1930) - the present being one of the most famous - inserted itself in h istory in another fashion, namely by being the first photographs taken by human beings. The quality of the images created by the two men on July 21 and July 22, 1969 is high - ironically so high that conspiracy theorists ever since have used exactly this as an argument: How should it be possible at that day and age and under the given circumstances to produce such excellent photographs?

This is an original NASA colour offset photograph from the late summer of 1969, whose edges have yellowed slightly due to ageing/storage conditions. Furthermore normal signs of handling.

Preview
No preview for items sold through Direct Auction
Auction

Shipping
Log in to see the cost for shipping this lot to your address.

There is no option to pick up this lot.