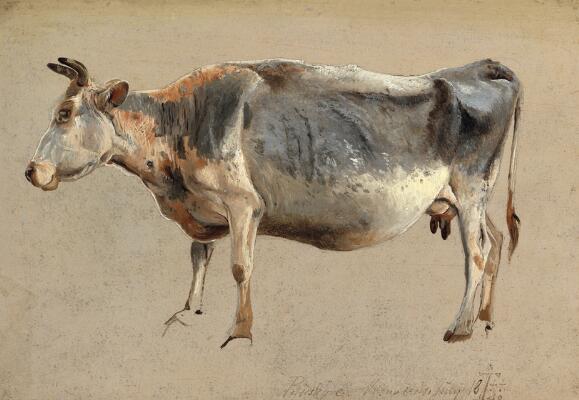 In the summer of 1844, Lundbye was strongly affected by Margrethe Bauditz’s rejection of his marriage proposal in early June of the same year. After the failed courtship, he left Copenhagen for a period of time, and among other places he stayed at Vognserup Manor, where he spent a few weeks in the company of the art historian Niels Lauritz Høyen.

During the summer, Lundbye created many studies of cows. In his journal, he contemplates the process of painting from nature, the character of the study, N. L. Høyen's opinion on this, and the joy associated with becoming confident in one’s craft and gaining a true understanding of nature.

On 28 July 1844, Lundbye writes in his diary: “I have to the best of my ability studied the animals, but it is a difficult subject since the models are so unruly, and I can do almost nothing without the help of others. When I paint the animal, I have to have someone to hold the model and ideally turn and adjust it, to preserve the initial position. But the accuracy expected in the depiction of the human body cannot be achieved here. Therefore, it is difficult to check the painter of animals, a degree of leeway that I have no intention of taking advantage of, since the truth must be paramount and also has the peculiar convincing aspect about it, so the viewer feels that yes, this is what it’s like in nature. Thus, the more I can include in my depictions, the better, and the more I can get out of the same conditions, the better, but it is hardly possible for me to complete the study of an animal under the same lighting, the same time of day, let alone manage studies of an entire group. There is always a lot left to memory and a true and trained eye. That is why I still have to rely heavily on what I learn from my visits to the stables and the milking parlours. I know Høyen will fight this intensely, but time, which might afford me a myriad of studies, is the only thing that can give me the undeniable certainty it is to have studies of everything."

And on 28 August in 1844, he writes: “Do I have reason to be happy? And what might the reason be? Yes, because I have come to know the cow far better than before. ‘Is that so much’ others might say, and I might myself tend to agree with them, but it is more than it seems at first glance because it means that I have left the childish way of studying behind, or rather, I have learned to study. Thus, subtleties have emerged for me that I never imagined possible; peace and order have settled in my mind regarding my work as well as a greater degree of satisfaction."