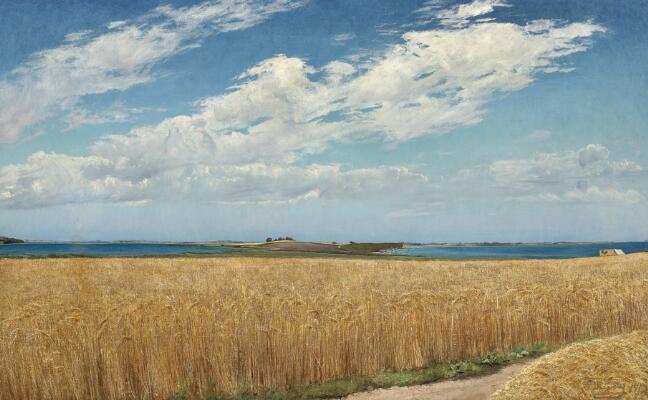 Purchased by Ribe Kunstmuseum in September 2021.

In 1910 Ring had a horse-drawn bus converted into a summer house caravan, so that the family could live close to the sea during the summer and easily move from place to place. During the following summers, Ring painted many beach areas and coastal landscapes from Greve Strand, Karrebæksminde and – as can be seen here – Enø.

The summer house caravan can be seen in several photographs from the time and became a central motif in many of Ring's works from these years, including “Kunstnerens sommervogn med telt. Enø Strand” (The Artist's Summer Caravan. Enø Beach) (Nationalmuseum, Stockholm inv. no. NM 6859) from 1913 – the same year as this painting. “For Ring, the caravan represented a kind of safe haven where his nomadic nature could be satisfied as well as his artistic needs, because it allowed him to find the motifs just outside the vehicle or in depictions of the caravan itself.” (Henrik Wivel, “L.A. Ring – Det glasklare hjerte”), 2020, p. 227).

In the present painting, the yellow caravan with the tent in front can just barely be seen to the far right up against the blue water. The caravan appears very small and fragile at the end of the ripe wheat fields with the dark blue waters of the fjord behind it and under the fierce and large light-blue sky above with drifting white summer clouds – as if the movable home was held by a pair of tweezers –both exposed and protected by the land, water and sky.