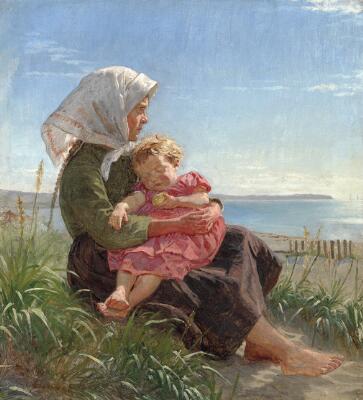 In 1873, Krøyer went for the first time to the fishing village Hornbæk, where the local population inspired him to paint several paintings depicting the life of the fishermen and their families, as in this small charming painting with two little sisters.

Here in Hornbæk he met his painting colleagues Bernhard Middelboe, Kristian Zahrtmann and Holger Roed. Later, Frants Henningsen joined them. They enjoyed socializing with bathing, walking along the beach or in the woods or they enjoyed each other's company with uplifting conversations.

In addition, time was spent collecting motifs and painting them. Among several paintings three distinctive paintings were made during this period: “Fra Smedien i Hornbæk” (From the smithy in Hornbæk) and “Morgen ved Hornbæk. Fiskerne kommer i Land”, (Morning at Hornbæk. The fishermen come ashore) (both in the Hirschsprung Collection) and “Fiskere ved Stokken” (Fishermen on a bench) (private collection). All dated 1875.