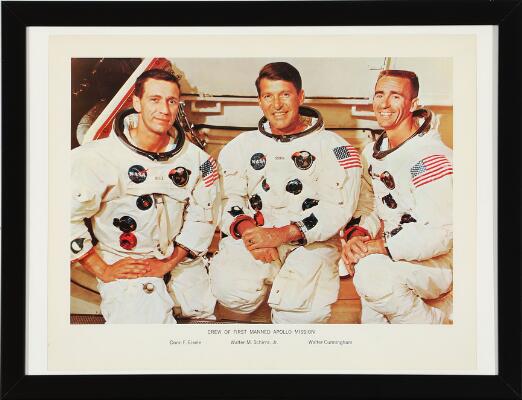 With the launching of Apollo 7 on October 11th 1968 - the first manned Apollo Mission - the dream of reaching the Moon moved a lot closer to NASA and the Americans. Also when it came to communication big steps into the future were taken, given that Apollo 7 was the very first space mission from which live tv could be sent directly down to the viewers, at the time an enormous landmark.

On October 22nd 1968 - after approx. 11 days in space - the three astronauts returned unharmed to the Earth. The landing took place in the north western part of the Atlantic Ocean.

This is an original NASA colour offset photograph from 1968, which has yellowed slightly due to ageing/storage conditions. Furthermore normal signs of handling.