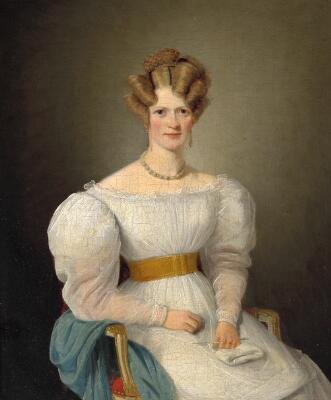 The catalogue contains the following description of the portrait and its provenance:

“In this newly discovered portrait of Marie Raffenberg, Wilhelm Bendz has painted three quarters of her figure, sitting in the Louis XVI chair that stood in his home [...] She is wearing her engagement ring on her right hand. The painting, which has always been in the family’s ownership, can be traced back to Just Thiele (1843–1916), who was the son of Secretary at the Academy of Fine Arts, Just Mathias Thiele (1795–1874), and married to Malvina Frederikke Raffenberg. She was the daughter of Mads Emil Raffenberg, brother of Michael and Marie Raffenberg.” (p. 107)

Bendz has painted at least four portraits of his fiancée Marie Raffenberg. One of these works is a small portrait (16.5 cm x 13.5 cm) painted on copper in 1831 (The National Gallery of Denmark, inv. no. KMS 1652), which Bendz probably painted for himself, so he could bring it with him on his long journey to Italy, which he embarked on in June of 1831.

“You are my most precious treasure here on earth, and afterward comes my art – without my art, I would be nothing, but I must try to reach the goal that no one reaches, or as close as my abilities will take me.” (Wilhelm Bendz' travel letters in “Wilhelm Bendz. Et ungt kunstnerliv. 1804–1832”, 1996, p. 223).

Marie Raffenberg and Wilhelm Bendz were never married. Bendz died of illness during his trip to Italy in Vicenza on 15 November, 1832.

Marie Raffenberg married the Member of the Chancellery B. C. Grønberg in 1840 and, like her fiancé, died prematurely in 1845.