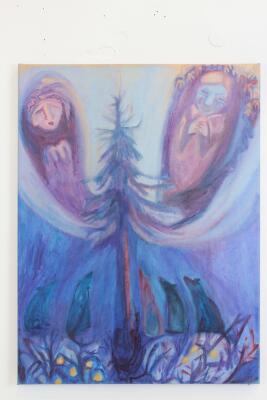 Kinga Bartis is a Transylvanian-Hungarian born artist, based in Copenhagen, Denmark. Her works are reflections on existence and similar matters in various power relations. She navigates between the private and the political, depicting a mental landscape with a subjectivity, that is resonating between the inner universe and the outside world. She uses painting as a tool to disrupt socially constructed categories and divisions, aiming to explore the possibilities beyond the so called rational. Her figures are the observer and the observed, often placed in a landscape, in water, organic surroundings, emphasizing the body and the world inhabiting one and other. Moving between these universes loosens the impression of an alienated, static state – an illusion that contemporary bodies can be often fooled by.