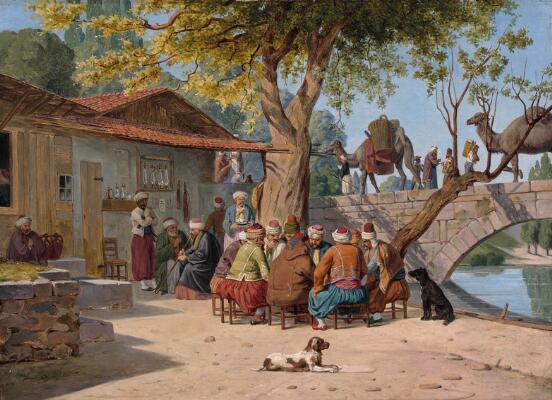 Thorvaldsens Museum, A Catalogue Raisonné of the Works of Martinus Rørbye no. 156 here mentioned as (in Danish): “A preparation for or simplified repetition of no. 155” in the Catalogue Raisonné (with the dimensions 36×51), which was Rørbye's membership work for Charlottenborg 1839, exhibited as no. 43. That one is owned by the Royal Danish Academy, Akademirådet (the Academy Council).

Rørbye also carried out a watercolour entitled “Scene of public life in the Orient. A coffee house by the Caravan Bridge in Smyrna”, measuring 30×42, in manufacturer P. F. A. Thomsen's collection. Sold at his auction 1920 no. 113.

Literature: Små Kunstbøger vol. 22 reproduced p. 37. Wrongly described as being the membership work belonging to the Academy of Fine Arts.

Through Rørbye's diary notes and letters we can follow him on his journey to Smyrna (present day Izmir), which began on 11 December 1835.

Rørbye notes 14 December 1835: “After sailing all night, we came to Smyrna in the morning at 11 am. The approach from the seaside is very beautiful, and the loveliest colours were everywhere in the landscape, but it was cold, and we saw snow on the highest mountains. Since the steamboat will stay here a couple of days, we went ashore and found excellent accommodations at Biacini Cancianne Pêcheri|erie| thanks to Consul Weste's recommendation. Our host, was with us all afternoon, we saw everything and were even inside a mosque after we had pulled our boots off. The Bazaar was also very interesting”.

Rørbye notes 15 December 1835: I haven’t slept as well as I did last night for a long time, it seemed to me in the morning as if I were in the countryside at home in a small guestroom; and in the morning I immediately brought in a small bed warmer to make up for the cold weather, which was pretty bad all day. I walked up to the old Citadel, where you have a glorious view of the city and the surrounding area. From there we went to the Ponte del Caravani where we drank coffee with the Turkish Guard. We saw the cemeteries, the Turkish Quarter etc. In the afternoon, we strolled through the city and the Bazaars; but the cold kept me from drawing anything."

Rørbye notes 16 December 1835: "In the morning I strolled again to the Ponte del Caravani, it was my intention to draw a little; but it is still almost too wondrous here. One has hardly pulled oneself together after seeing a quaint figure or object before another even more marvellous object appears. Long rows of camels, led by and carrying black people, peculiar costumes everywhere, and very beautiful surroundings. In the afternoon, we strolled in the Bazaars – chased down as yesterday by impertinent Jews. We were also in a Turkish café.

Rørbye notes 17–19 December 1835: "Our host was with us all morning, and we were inside several picturesque Turkish cafes, a Jewish courtyard, and a couple of Greek churches. I walked through the Turkish Quarters of the City again today; but it was far too cold to draw there, I have made enough though, and the people seem to be polite to strangers. At four o'clock we boarded the steamer Levant once more and sailed on.

(Martinus Rørbye's travel journals in “Kilder til Dansk Kunsthistorie” (ktdk.dk), (Primary Sources in Danish Art History) by MA and PhD in art history Jesper Svenningsen and published by the The New Carlsberg Foundation).

It is interesting to read about the excitement Rørbye felt about everything he saw and experienced in Smyrna and even more interesting that he commented that it was too cold to draw! If this was the case, then the present painting with its great richness of details appears even more impressive.