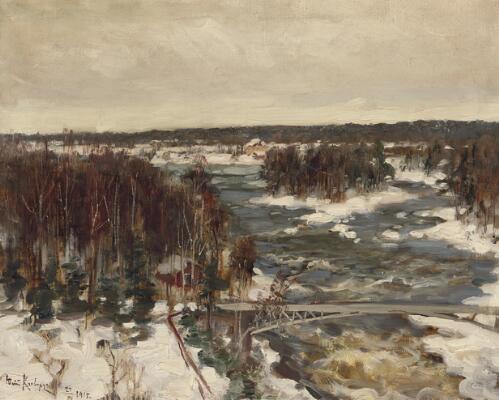 View of the Vuoksi River at Imatra, Finland. Signed and dated J. Klever 27/III 1915 (in Cyrillic). On the reverse inscribed with foreign hand “Study by professor” (in Cyrillic) followed by the artist's signature “J. Klever Imatra 27 March 1915” (in Cyrillic). Oil on canvas. 39×48 cm.

In 1903, an Art Nouveau castle hotel was built by the Vuoksi rapids in Imatra, a popular destination for excursions for the citizens of St. Petersburg.

Provenance: Acquired in Russia by bank director Richard Vilhelm Meyer (b. Copenhagen 1874, d. s.p. 1957). He bought the painting, while he was a representative of the Danish Ministry of Foreign Affairs as a section chief in the finance department at the Danish Legation in St. Petersburg 1917–1918 under the envoy Harald Scavenius. Thence by decent to Richard Meyer's great-granddaughter with residence in Denmark, until today.