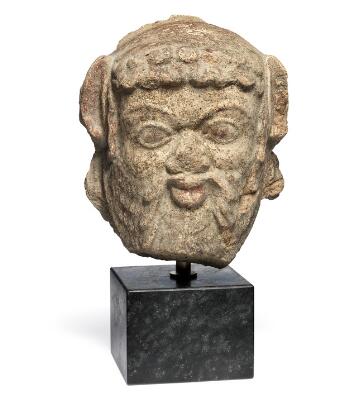 An Etruscan mould-made terracotta antefix of a bearded and snub-nosed Silenus, the face is beige with red eyes and mouth, the front hair is arranged in symmetrical curls and the sides dominated by large pointed ears with remains of red colour. Mounted on stand. C. 500–450 BC. H. 15 cm.

Born in Germany, Heidi Vollmoeller (1916–2004) became an antiquities dealer in Switzerland during the 1950s. Over the next five decades many museums acquired works of art at Vollmoeller’s gallery.