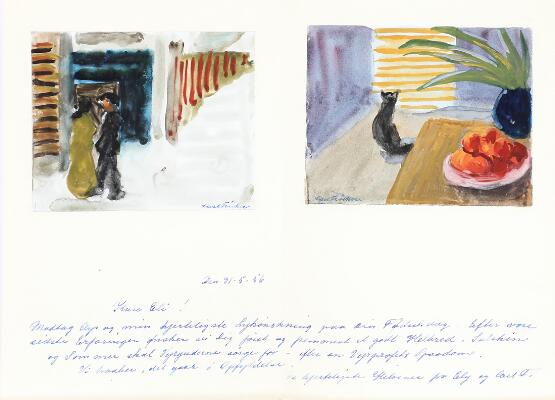 View of a street with people and Interior with a cat and a platter of oranges. Signed Carl Fischer. With a personal greeting from the artist and his wife dated 31–5-56. Both watercolour on paper laid on the same paper. 12×15 cm. Unframed.

The artist Carl Fischer (1887–1962) worked with landscapes, still lifes, and street scenes, but became especially known for his figure paintings and representations of women in half or full figure in interior settings. Fischer liked to work with simple forms in subdued colours occasionally contrasted by strong colour accents, and his artistic expression bears traces of the style of the French modernists. He won great recognition in his time for his focus on the interplay between form and colour as well as for his ability to convey the models’ personality and psyche. The models were often his wife Ely and the children and grandchildren. Fischer exhibited for many years at Charlottenborg and in 1922 he was awarded the Eckersberg Medal. His life is depicted in the historical novel from 2020 “Hvor lyset er” by the author Malene Ravn.

Delivery in the United States from 630 DKK provided the final price does not exceed 50,000 DKK

Log in to see the cost for shipping this lot to your address.