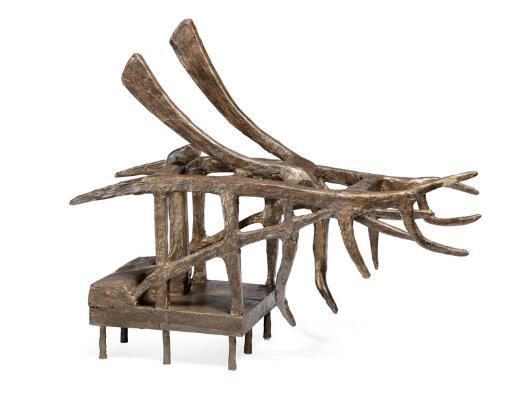 “Undervejs til min elskede” (In Search of My Beloved) or “Lillebæltsbroen (Litlabeltisbrúin)”, modelled 1955, later cast. Unsigned. Cast in one bronce version and an edition of four polyester casts. This is No. 2/4. Polyester. 43×50×18 cm.

Sigurjon Ólafsson modelled the sculpture in plaster in 1955 with few means and in a small loft apartment in the neighbourhood of Nørrebro, Copenhagen, where he lived temporarily with Birgitta Spur and their two children. The study was only a few square meters in size and perhaps that is why he devised such a giant sculpture, which he pictured being placed above a street where the traffic could run between the pillars under the sculpture's pedestal. The dragon-like sculpture with wings contains surreal elements, not least the skeleton-like bridge construction. The title of the work, “Undervejs til min elskede” (In Search of My Beloved), comes from Martin Larsen's Danish translation of a book by the Icelandic author Þórbergur Þórðarson, published in 1955 by Schønbergs Forlag. For an English edition of the same text, published in 1967, the Icelandic poet and writer Kristján Karlsson (1922–1974) wrote the following introduction: "In Search of My Beloved presents Thordarson's major image, The Unattainable Woman, who is, aside from the personality of the author, the central figure of his reminiscences”.