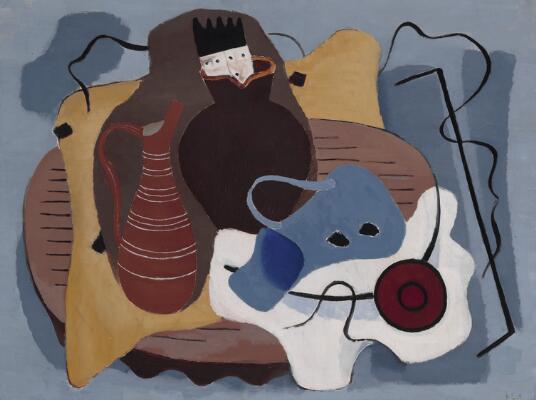 Rita Kernn-Larsen made her debut in 1934 in Copenhagen, and the press called her “a female Danish Picasso”. Before that, she was educated at, among other places, the Norwegian National College of Art and Design in Oslo, the Royal Danish Art Academy in Copenhagen and at Académie Moderne under Fernand Léger. She thus spent most of her artistic life initially in Paris, then in London, and she did not return to Denmark until the mid-50s. Kernn-Larsen participated in several surrealist exhibitions in the 1930s, and she became associated with the artist group known as Linien. For many artists, surrealism offered not just the chance to experiment with style and technique, but also a change in attitude away from the conventions of the bourgeoisie, and it was perhaps this showdown that for several of the progressive female artists of the time seemed particularly enticing.

During World War II, Kernn-Larsen lived in London, where she experienced the many horrors of the bombings up close. As a result, she sought out new artistic venues and settled in the South of France, where the yellow-green colours of nature, the vineyards and the intimate everyday life became sources of inspiration for her painting. From the 1960s and onwards, she expressed herself more abstractly in painting and collage form, but later she would share the fate of so many of her female colleagues and was nearly swallowed up by oblivion.

Here at the auction, we can present a beautiful still life with different jugs on a table. The composition is made up of both recognizable objects, but at the same time a series of soft organic lines that connect front and background together.

In recent years, Rita Kernn-Larsen has returned to the forefront of art history in earnest. In 2017, the Peggy Guggenheim Collection in Venice curated a representation of her works, and the following year her art was highlighted in Denmark together with her artist colleagues Franciska Clausen and Elsa Thoresen at the exhibition “Women of Surrealism” at the Gammel Strand art association. Furthermore, Kunsten – Museum of Modern Art Aalborg in collaboration with Gammel Holtegaard held a solo exhibition in 2019, and finally she appeared at Louisiana in the summer of 2020 in distinguished company alongside names such as Frida Kahlo and Meret Oppenheim under the title “Fantastic Women”.